The guqin is a plucked seven-string Chinese musical instrument of the zither family. It has been played since ancient times, and has traditionally been favoured by scholars and literati as an instrument of great subtlety and refinement, as highlighted by the quote "a gentle man does not part with his qin or se without good reason," as well as being associated with the ancient Chinese philosopher Confucius. It is sometimes referred to by the Chinese as "the father of Chinese music" or "the instrument of the sages". The guqin is not to be confused with the guzheng, another Chinese long zither also without frets, but with moveable bridges under each string.

Traditionally, the instrument was simply referred to as the "qin" (琴)[2] but by the twentieth century the term had come to be applied to many other musical instruments as well: the yangqin hammered dulcimer, the huqin family of bowed string instruments, and the Western piano are examples of this usage. The prefix "gu-" (古; meaning "ancient") was later added for clarification. Thus, the instrument is called "guqin" today. It can also be called qixian-qin (七絃琴; lit. "seven-stringed zither"). Because Robert Hans van Gulik's book about the qin is called The Lore of the Chinese Lute, the guqin is sometimes inaccurately called a lute.[3] Other incorrect classifications, mainly from music compact discs, include "harp" or "table-harp".

The guqin is a very quiet instrument, with a range of about four octaves, and its open strings are tuned in the bass register. Its lowest pitch is about two octaves below middle C, or the lowest note on the cello. Sounds are produced by plucking open strings, stopped strings, and harmonics. The use of glissando—sliding tones—gives it a sound reminiscent of a pizzicato cello, fretless double bass or a slide guitar. The qin is also capable of many harmonics, of which 91 are most commonly used and indicated by the dotted positions. By tradition the qin originally had five strings, but ancient qin-like instruments with 10 or more strings have been found. The modern form has been standardized for about two millennia.

There are more than 3,360 known pieces of Guqin music. On 7 November 2003, the UNESCO World Heritage Committee announced that the Chinese Guqin was selected as the World Cultural Heritage Centre. In 2006, Guqin was listed in the List of National Non-material Cultural Heritage in China. 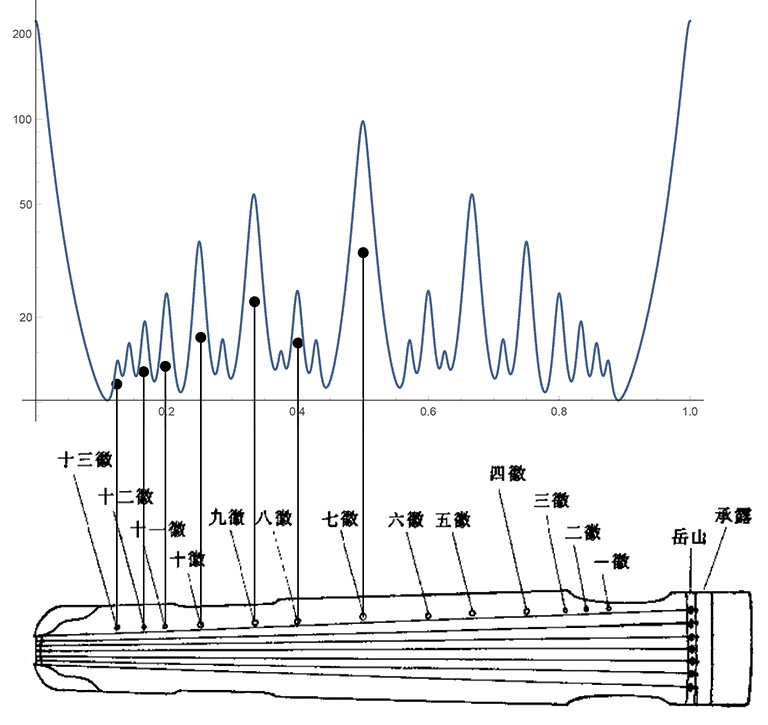